Recall the formula of ,

According to the above formula, it is a system of simultaneous linear equations in unknowns. However, in practice, due to the limitation about computation resource and time consuming, Dynamic Programming is always used to solve above problems. And iteration method is the most common used and suitable. To convert the above formula into iteration format, we just need to convert the note to iteration step indicator . Then we get the new formula,

It is proved that the state-value function will be optimized.

Moreover, there are two methods about implementing the iterate formula. One is to use two array to represent the state before and after one iteration. Another is to only use the original state array and update in-place. In practice, the second one provides us a faster converge speed, since it gets to use the updated values sooner, and occupies less memory space than the two array version implementation.

Then the algorithm pseudo-code is: 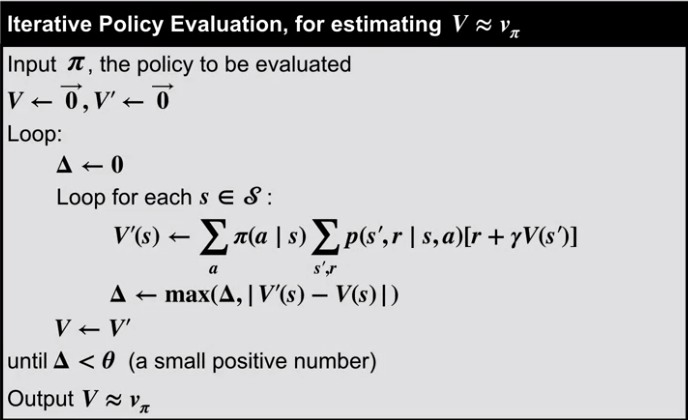 In practice, we almost cannot reach the convergence in short time, so that we set a margin to help us stop early and keep a relative good result.

If the greedification, the operation, doesn’t change , it means the is already greedy with respect to its value function . Moreover, we need to determine a way to compare two policies. The policy improvement theorem is introduced to do it. It says,

Here, cannot be solved by linear programming. We also use dynamic programming and iteration method to solve the problem. In each iteration, according to the policy improvement theorem, we need to produce a strictly better policy than the original one. 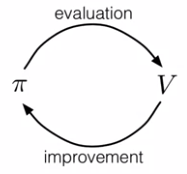 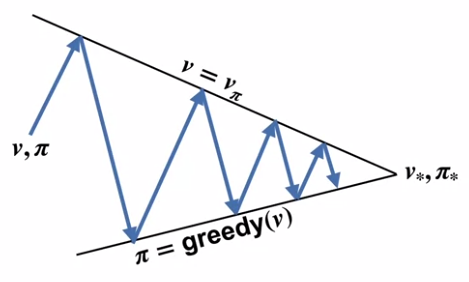 The algorithm pseudo-code is: 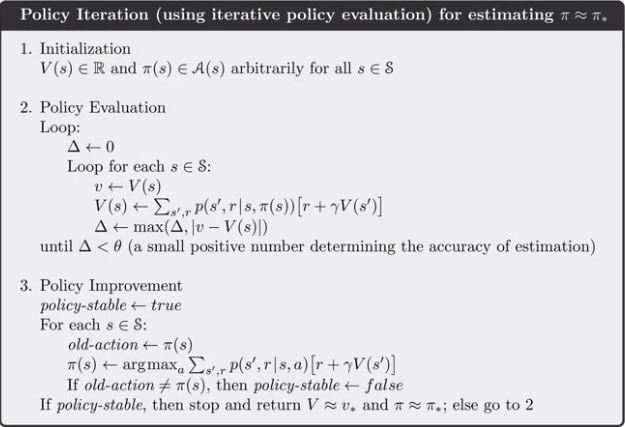 Value iteration sweeps once in policy evaluation part and then do policy improvement. By combining the two formulas, the update formula would be,

It can be showed as, 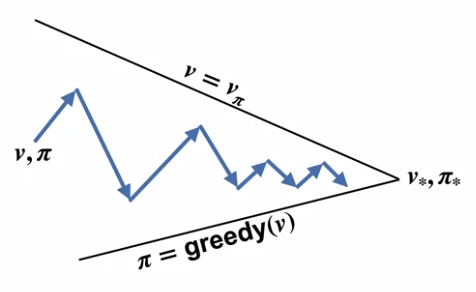 For each iteration step, it doesn’t finish it completely but continuously improve itself until convergence. The algorithm pseudo-code is,

The two iteration methods above are all synchronous DP, which means they systematically sweep the state set in one iteration. However, if the state set is very large, such as states, a single sweep can be prohibitively expensive.

Asynchronous DP, instead, update values of states in any order. Some states may get several updates while other states are not visited. In order to guarantee convergence, asynchronous DP must continue to update the value of all states.

The key of Monte Carlo method is to calculate the mean of several samples under current state. The formula is,

For each state, the method will average samples to get the value of the current state. When the number of state is large, it is time consuming.

Brute-Force Search is the most basic idea on finding the optimal policy. However, due to the number of possible state combination growth exponentially when states increase, , it is impossible to try them all.

Compare to Monte Carlo method, DP method use successors calculated state to calculate current state value, which do not handle each states independently. The method is also called bootstrapping.

Also, Policy iteration can control the running time to polynomial time in and , rather than .